Primary succession is one of two types of biological and ecological succession of plant life, occurring in an environment in which new substrate devoid of vegetation and other organisms usually lacking soil, such as a lava flow or area left from retreated glacier, is deposited. In other words, it is the gradual growth of an ecosystem over a longer period. In contrast, secondary succession occurs on substrate that previously supported vegetation before an ecological disturbance from smaller things like floods, hurricanes, tornadoes, and fires which destroyed the plant life

In primary succession, PIONEER SPECIES like lichen (a "composite" organism of both algae and fungi) as well as other abiotic factors like wind and water, start to "normalize" the habitat. Primary succession begins on rock formations, such as volcanoes or mountains (or in a place with no organisms or soil). Lichen can grow on bare rock face. They consisit of symbiotic autotrophic algae (which can photosynthesise) and heterotrophic fungi (which obtain glucose from the algae and in return provide the algae with a protective habitat formed by their hyphae). The lichen secrete acids which contribute to the erosion of the rock face and release of minerals over time, leading to formation of shallow soils. Seeds or spores blown into these soils on the wind may germinate and baisc/primitive plants, like moses, can stat to emerge. These are termed pioneer plants. These pioneer plants are then dominated and often replaced by plants better adapted to less harsh conditions, include vascular plants like grasses and some shrubs that are able to live in thin soils that are often mineral based.

Example:
Spores of lichen or fungus, being the pioneer species, are spread onto a land of rocks. Then, the rocks are broken down into smaller pieces and organic matter gradually accumulates, favouring the growth of larger plants like grasses, ferns and herbs. These plants further improve the habitat and formation of deeper and more fertile soils (as they become decomposed by bacteria/fungi leading to release of ammonia/ammonium ions into the soil which may be converted to nitates by nitrification: see Nitrogen cycle page). This help the adaptation of larger vascular plants like shrubs, or even medium- or large-sized trees. More animals are then attracted to the place and finally a climax community is reached.

The climax community is a stable/mature community of different species which are in equilibirum and unlikely to change over time (unlikely to be dominated or replaced by other species). 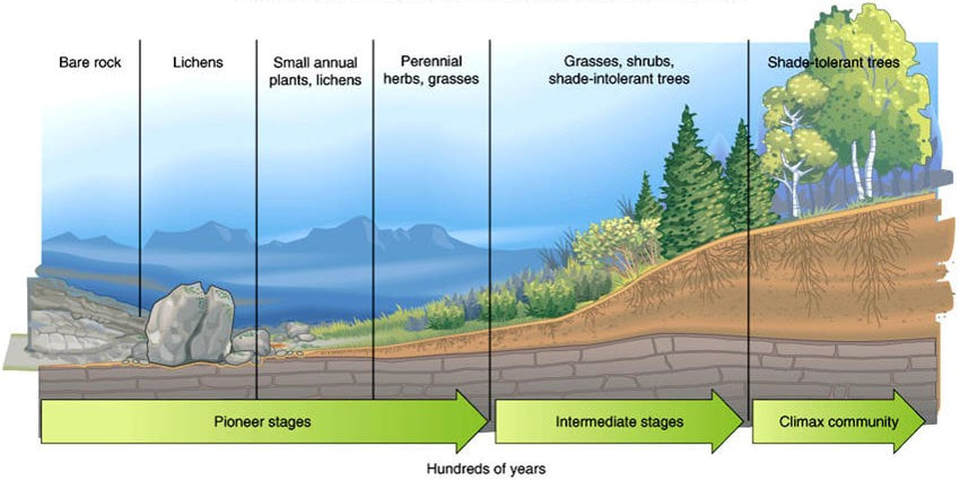